The Halflands is a fantasy setting for stories and role-playing games that I have been creating for a decade or two, one that is built on earlier worlds used for fantasy, science fiction and superhero role-playing games for another two or three decades before that.

They are called “the Halflands” because rather than be a world or realm of their own, they are what TV Tropes calls a “Portal Crossroad World”, like C.S. Lewis’s “Wood between the Worlds”, “the Neitherlands” in Lev Grossman’s The Magicians, the “World between Worlds” of Star Wars Rebels and the like. It’s a place where the paths between worlds intersect.

The Halflands is unlike these other places between worlds in that it has a fairly extensive geography, history and population of its own. It is a setting in which many stories can be told. Moreover, a number of other realms or otherworldly lands border on it, places like the Faerie Summerlands; Jinnistan, home of the Jinn; and Patala, the land of the Naga serpent-folk. As mentioned, for those who know how to find and walk them, there are paths—the Witch Paths—leading through the Halflands, taking them between worlds.

I have a number of stories set in the Halflands or the worlds accessible through them, as well as some work done on pulp and fantasy role-playing campaigns set there. By and large, these are not yet ready for prime-time. A couple, however, are getting close enough to talk about here and elsewhere.

The first is actually set in the Halflands: Aunt Jenny and the Delayed Quest. An image of my Aunt Jenny business card appears above. Clicking on it, the Aunt Jenny button in the menu bar or the link in the previous sentence will take you to the page for her story, including a teaser short story. 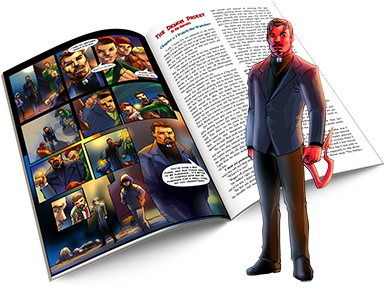 The next is the tale of the Demon Priest, set in a world of pulp adventure and superheroes. I had a lot of fun writing it and I hope that my readers will as well. Unsurprisingly, the main theme is “What the devil is a ‘Demon Priest’ and how could he come to be?”. To be honest, he started as a slip of the tongue that the philosophy major and novelist in me just couldn’t let be. I suppose I could say ‘the devil made me do it”, because, like Aunt Jenny, he was a character that just insisted that his story be told.

While the novel itself is still a work in progress, it has its own page here on Halflands.com, as well as a comicbook-format teaser preview at IndyPlanet, and pages on the G-Man Comics website. 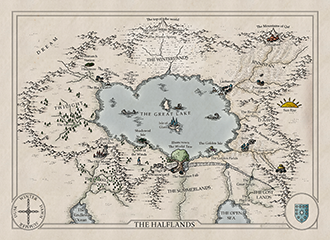 The map of the Halflands shown to the right was drawn for me by Karl Vesterberg based upon sketches and descriptions from my works in progress. Karl specializes in old style cartography and can be found at the "Traditional Maps" Web, Instagram and Facebook sites.